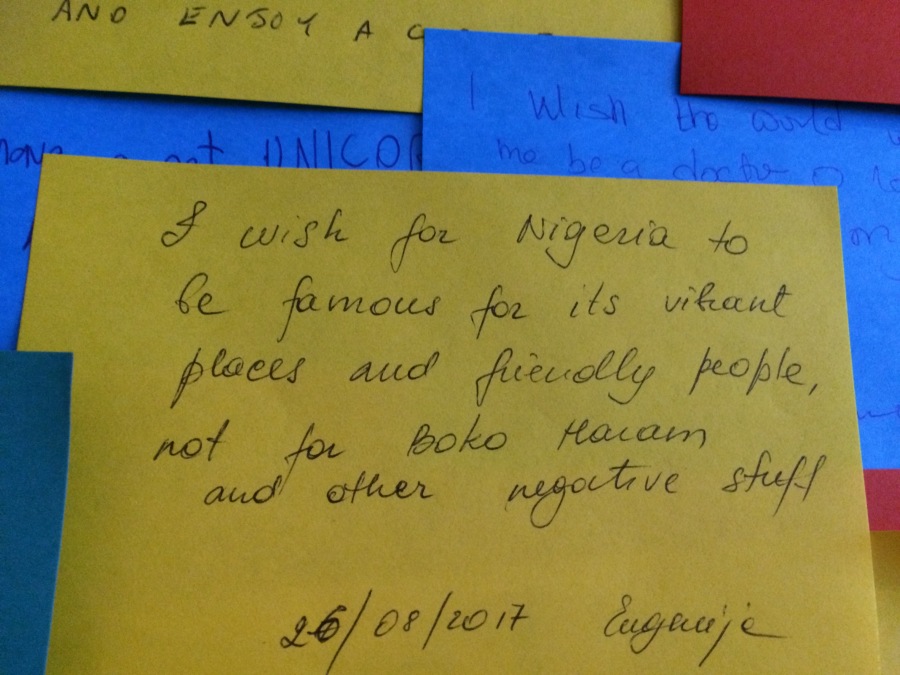 “I live here, I may as well like it”, I retorted as I discussed the chaos that can be life in Lagos, to my newly-found friend who was visiting me from my beloved Uganda. And herein opened the can of worms that my mind and body has been keeping a rather large lid on.

I haven’t actually been liking it at all. Not inside. Not in my heart. Not in my inspiration.

Perhaps in fact, it was the fault of the intensive physio program I was ensuring I followed, due to my determination to be fully fit, flexible and mobile, so that I could get my life back…

The question I was brought back to, therefore, was “But how do YOU FEEL about …” And as I heard myself talking about the merits of Lagos and my life here, the stories I have learnt and those that I have written myself, I realised I was very much stuck in a rut.  A rut in my own head. Yet actually I was more than okay. It was only as I spoke to another, who in most senses of the word was a complete stranger to me, did I notice that actually there are many things I like about being here. What was really affecting me, was the fact that I was hardly getting to enjoy them. I had become entrenched in 2 hours a day of physio, such was my resolve to return to full mobility and flexibility, and my determination not to do anything that would prevent this from happening. However, though this was helping my leg, it was damaging my health. My state of mind. My immune system.

My mobility was increasing and each morning when I woke, the agony of not being able to stand up for up to ten minutes after waking and the surges of pain that therefore ensured, were decreasing. I was on course with the program and I had even managed three runs – I literally cried in the gym with delight, exhilaration and disbelief. 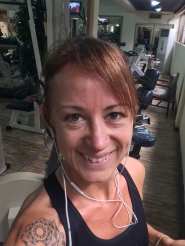 My new friend came to stay, and she regaled to me different experiences and stories that she had already gained during her time in Lagos (she is a journalist). She found it odd that I was so positive about the place, given the high levels of traffic, the slow pace that areas of hospitality gave, and how often everything can change at the last minute (including flights even when midair). And I found it odd, that she found this odd.

I spoke of the arts, the crafts, the intricate languages, the warm air, the beautiful palm trees, the birds, the national attire, (especially worn on Fridays), the music, the dancing, the laughter, my amazing apartment, the beaches, the lovely people I work with, the restaurants….and I realised I was actually doing just fine here. I meant it when I said it; I live here, I may as well like it.

So. I made some new friends and went and discovered the concept of Lagos beach-houses. Wow. Fresh sea air. Beautiful food and company. Sand in my toes. Villages to explore, children to engage with…. 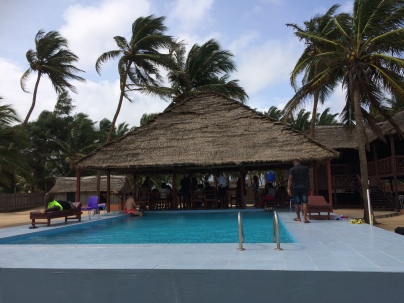 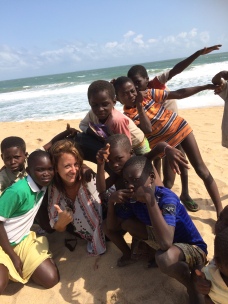 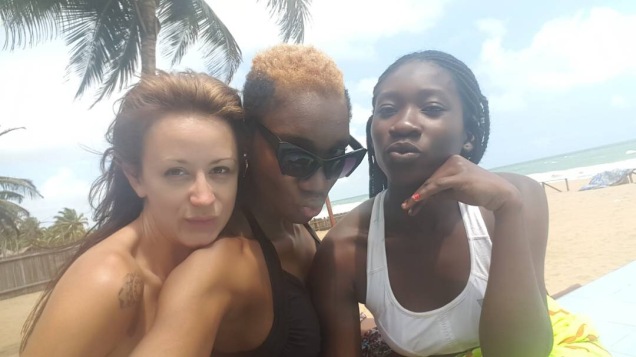 I thoroughly enjoyed an evening detailing the history of Lagos, as told through music, at a local art gallery and I went to a Reggae festival to dance as best as my leg would allow. (It seems the rhythm of reggae is actually very useful for rehab. Not much twisting and a nice easy flow through the body and soul)…. 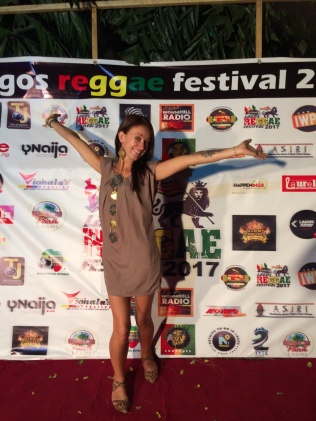 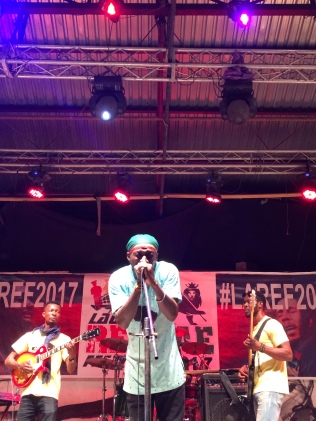 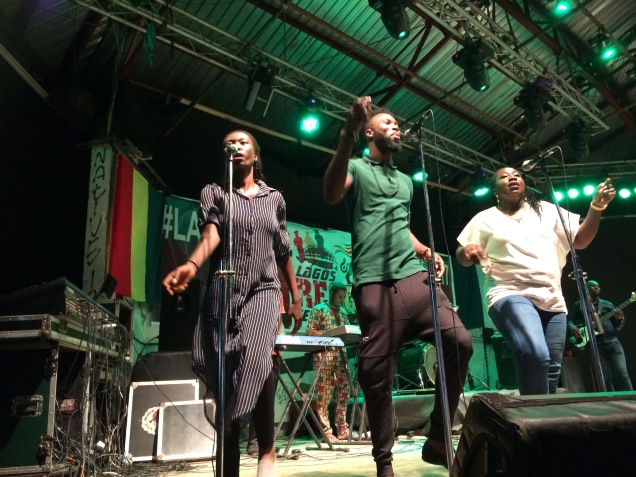 I went to the Lights Camera Action (film) festival and thoroughly enjoyed the wide variation of shorts available for view. (Interestingly much of the audience was disgruntled with the showcase film, not understanding it and seeming disappointed that they could not just zone out and be easily entertained by it. Me, I love art-house films, and this feature was of a similar to a couple of others I have enjoyed courtesy of the Duke of York’s Picture House, Brighton. I was captivated by the cinematography, engrossed in the open-ended story line, and delighted by the recognition of the scenes made in Lagos.)

I even ventured out on the ocean, for my first ever sail on a catamaran (Hobie 16 – not that I knew what this meant!). 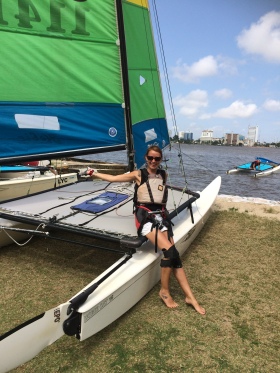 However. It wasn’t penetrating. Ultimately there was another story below the surface.

I was sad, frustrated, and still in pain. The adventures I had been taking myself on were great. But they were only temporary alleviations. And then, I got sick. I found myself with a sore throat lasting more than 5 weeks, and a voice that had become hoarse and deep, and no longer like my own. The gym was my main companion, and as my fever peaked, I could not go there either.

I may as well like it…I repeated this to myself over and over. I had said this without thought, without intention, and without holding back. I did like it. I do. My new bedroom is level with the trees, and I never close my curtains; I adore sleeping with the palms in sight and awaking to the sound of the birds singing in them. What is not to like? 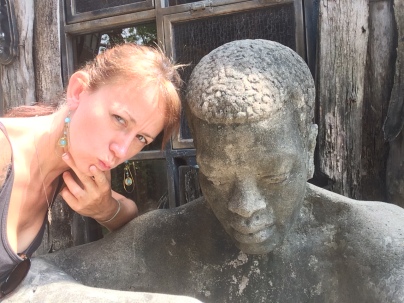 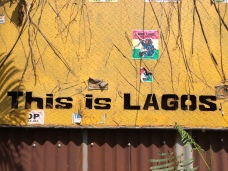 I am forever thankful to my own heart for bringing me here. I knew I had to leave Uganda when I did. I had to break a cycle of health care that was getting me into a worse condition. And I was unable to re-locate to a new job whilst physically unfit or without a transferable work visa. I needed to leave, in order that I would be able to come back. As it is written in the book Illusions, a farewell is necessary in order that we may meet again. However, all this time, I had been consciously or unconsciously nursing a broken heart for my separation from Uganda. And I had now become consumed by a cloud of pain and constant physical rehabilitation that meant I was cut off from the world. Or at least, in the sense of presence and wonderment that I wanted to receive it with.

The more sick I became, the less I could do any physio. And all of a sudden my leg was locked up.  My pain levels jumped right back up again and I found that I could not get out of bed without a small scream each day. I plummeted. Such was my grief that my hard-work over all those months had gotten me back to square one.

I couldn’t bare to tell anyone really. And I had hardly seen any of my social group here anyway, so they were not to know. I missed my old friends who had left here also.

However, it felt so against my grain to be going away from Africa, when originally I had planned to be in Uganda, that I couldn’t work out what was happening. I breathed into my heart and found Paris was calling me. I needed sumptuous food, I needed art, I needed to be around a language that I had once known intimately. And I needed fresh air. I needed to be able to walk around the streets and feel utterly consumed by wonder.

So that I may return to my home (here) and wonder all over again.

So I fixed it that I would first land in France, then England, and then return here. Not exactly a restful short break. But a re-energizing one that I deeply needed.

I needed more than the concept of “may as well” liking it. This was not good enough for me. Not then, and not now. I need to love where the “I” of me is, which is in my own heart. And I had been ignoring it. I needed to go, so that I could return. And I needed to be around love from my more-established kindred spirits, so that I could remember that I am connected to others, not just through the detached means of social media and voice messages, or through fleeting meetings squeezed in between physio sessions.

I am forever the optimist, of seeing the best in others and looking for the best in a situation. But I couldn’t see anymore. So I decided to go for a look. Whether my leg would allow me painfully or painlessly, I knew I needed to go for a wander. It was time.

One thought on “It’s all in the way that you feel.”