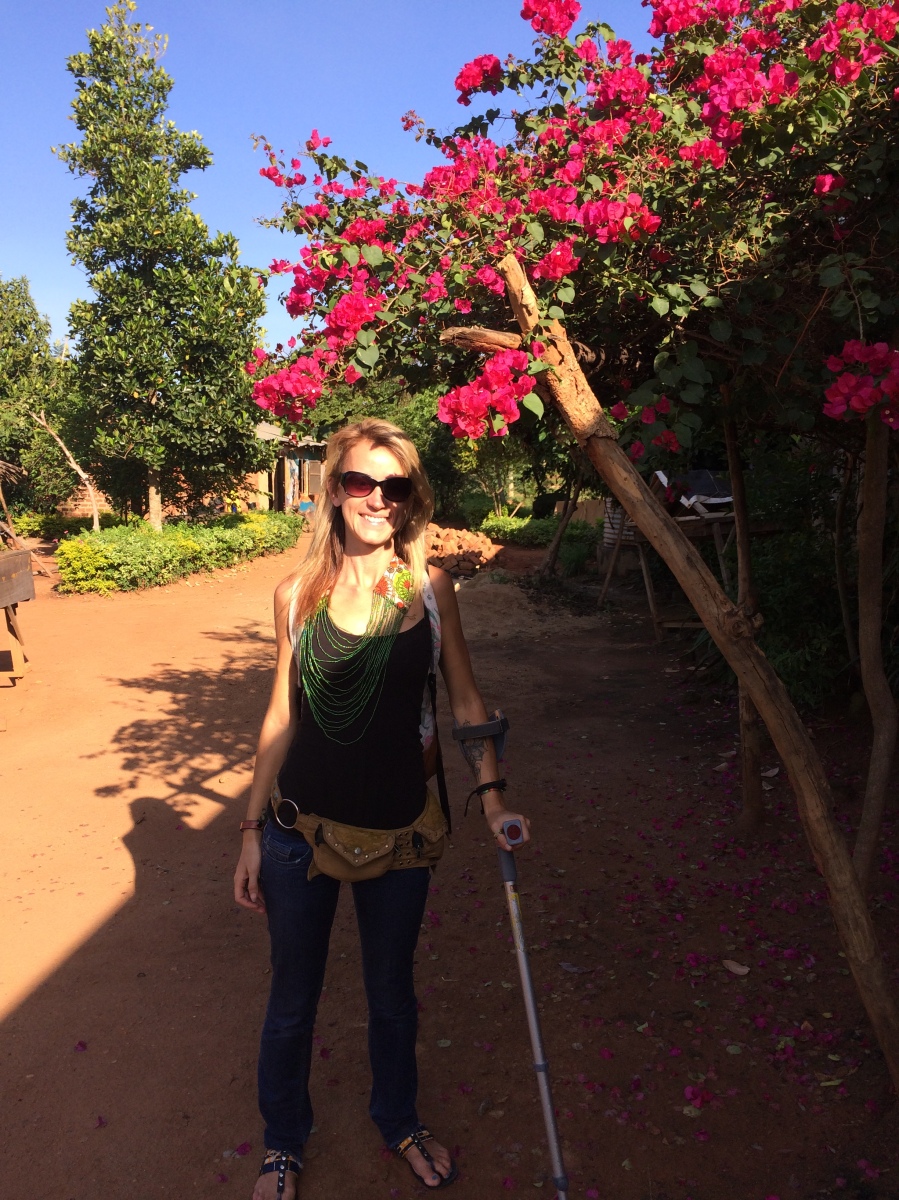 Many of my weekends in Uganda have been spent on the road; travelling around to seek new sights, meet new people, learn new stories. It is not a bad thing when I also spend time in Kampala however, as I have many friends here and there is much fun to be had.

I have been slowed down, a little against my will, but I have used this as another form of opportunity; I have explored the city in new ways, through friends and mischievious play, and I have also uncovered some hidden gems that many are unaware of.

After the enjoyment of Milege, I found myself with a phone full to the brim of new friends and offers of meeting up to share company, food and time together.

It was important to me that I kept a former commitment to the housekeeper of my friend, who had supported me greatly during my initial weeks of convalesnce post-knee dislocation, so that was one of my first reasons to keep me in the city one particular weekend. The promise had been that I would support her to run a stall at a Craft Fayre at one of the international schools here in Kampala (Rainbow International). There were big storms through the preceding night however, so I was reluctanct to travel in strong winds and rains whilst I am not 100% stable on my feet. So at first, I was unsure that I could honour my word, and I nervoulsy pottered around my home whilst I watched to see if the waters would ease and the red sands would dry out. It took quite some time, and many WattsApp messages, but in the end, it did all come to pass and I was able to arrive for my meeting in the early afternoon.

We located our table and laid out the beautifully hand-crafted wooden bead bags for all to see. Personally, I find them all to be pieces of art, and if I was the sort of person that switched bags around for use a lot, I would be eager to add some to my collection of belongings. (This is not wise for me however, I tend to lose vital things such as money, phone, keys, etc, as soon as I start to switch from one to another, and I have learnt through experience that keeping one trusted bag, until the moment it literally disintegrates through exhaustion of over-use, generally keeps me better equipped for my needs!)

Sadly, due to the rains I believe, or perhaps because it was Rainbow’s virgin voyage with a Fayre like this, we failed to make a single sale – not even able to recoup the money back for the stall itself. We had a handful of interested eyes set upon the bags, and many words of praise to the craftsmanship. But no money crossed our palms this time. I still feel it was worthwhile however, as it has begun to instill confidence in the daughter that she can travel with the bags to other markets in the future, now knowing what sort of thing to expect from the experience.

Later, I was able to spend much time in laughter with friends at Que Pasa, in Kololo, as I had been invited to their christmas party.This fascinated me simply by this title – thus far there has been little to no indication around the city that christmas is approaching, and with the constant amount of daylight each day and pretty much standard mild/warm temperatures, it really could be any day of the year to me and I would not know the difference.Consequently, when invited to a christmas party, I smirked and headed on over.That said, there was absolultey no indication at all throughout the night of how it was deemed to be linked to christmas, with the hip hop artist playing his music, the warm air on our bare arms, and drinks and conversation flowing much the same as it would any evening. 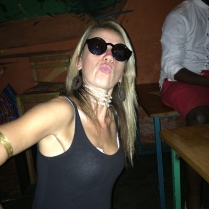 The concept of six (or is it now four or five?) degrees of separation came into play at various points in the evening for me, as I discovered I was linked to more and more of the bar’s clientele, including through one of my tailors, through festivals, and even through my beloved Hove, UK. It was great fun to connect with so many different beauties, and I was invigorated by the joy of it – as christmas parties go, this one was a wonderful one.

As we left I remarked on how I had enjoyed sitting beneath the stars from the roof of the Sky Lounge, wherein my friend said he had never been … so naturally I invited him for a nightcap of the evening up on the terrace, and we shared a Baileys, in honour of it being the festive season. (Funnily enough this is not a common drink here in Uganda, and my friend was somewhat intrigued by its taste).

As a new day approached, we were filled with many stories and adventures once more, as we had yet another day of two parts, amounting to the result of feeling like my weekend had been multiplied in time and experience.

To begin, Ivan and I amused ourselves with wandering around the chaos of town markets, where he laughed many times to himself, based on the Lugandan comments that were being made about me as we moved. He refused to tell me them until we were later sat down enjoying some tasty local food (Luwombo, yum!) near Owino market, but assured me he was keeping them all stored in his head for that time.

I needed some smart clothes for work, some warm clothes for my whistle-stop return to the UK, and a bag to accomodate all of this. I bargained hard, and I baragained well. Mzungu I may be, but someone to be ripped off and taken advantage of, I am not. I knew that even with my stubborness at accepting the prices the hawkers were offering and bartering them down to less than half, that they were still making good profits from me. So I stood my ground. I managed to get five pairs of work trousers for £2, four shirts for £2.50 and some leather boots for resisting the cold, for £10. All whilst I was hearing my name (“mzungu” that is) being used in quick succession and a repeated glint appearing in Ivan’s eye as it was.

As we approached another section of town and a more set-up market, the Lugandan comments were exchanged for English ones. A couple of guys came to me with sheer wonderment on their faces and expressed, “Mzungu, look at you, you have expired!“. This made me laugh aloud, as opposed to taking the offence that I think they were actually intending to me. Cheeky but oh so funny – apparently a crutch and a hobbling walk means I have reached my sell-by-date. Who knew!

Finally hearing some more of the comments from Ivan as we feasted on our goat stews, I continued to be amused rather than insulted. I know that often boda drivers and market sellers are talking about me, I know that I may be being regarded as a piece of meat or a walking wallet. But I see no sense in feeling annoyed or offended by this. An insult only carries its weight by its receival does it not?

The market sellers had been frequently exclaiming at their disturbance of the mzungu penetrating their market, or expressing excitement by the hoped-for profitable sales this may bring to them. One seller even offered my friend 500 shillings if he brought me back to him later on to buy some of his wares. Many people expressed shock at my appearance and stature -“Wow! I didnt know even mzungus can get lame!” and others commented on my weight – “Would you look at her, she is how many kilos? Doesn’t she eat?“

At times like this even more than normal, I wish I was more confident with Lugandan and could pick up on these comments and give some quick-witted replies in return. Though I am confident that Ivan did so anyhow!

For the second part of the day, as if the day had begun once more, we travelled over to see one of my Milege friends, Brian, at his permaculture farm over by Lutembe beach, one hour from Kijansi by boda. What a sumptious experience this was. 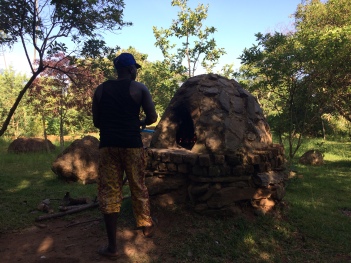 We ate freshly made pizzas from the hand-built clay oven (and watched each other helplessly as our eyes streamed from the heat of the chillies on them!), we chatted with friends and played with the local children, and later we were then treated to beautiful sights as Brian lead us around his land and his creations. The farm is really not that far at all from my place, as the crow flies, yet it was like stepping into another world. An absolute paradise in my eyes, and I was enthralled. There were trees of allsorts, including cashew nut, mango, lemon, acacia, teak, avocado and so on. There were plants of many foods and fruits, including cassava, blackberries, maize, lemongrass, chives and many more. 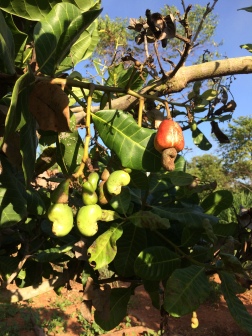 Brian spoke of the many snakes that happily live here, including Black Mambas and Cobras (admittedly I was really keen to discover one but with it being later in the evening and the ground somewhat overgrown, it was not wise to go snake-searching on crutches), and we then listened to yet another cacophony of birdsong in the air.

It is the intention that this space will continue to develop and transform, to become an arts and community project, and my ears were very pricked. The house Brian has built surrounded me with a soothing sensation (circular homes do seem to be enticing my heart and embracing me strongly) as we sat and enjoyed lemongrass and ginger tea, freshly grown from the gardens. I adored it, and it has inspired me for what myself and/or others that I love could also create in the future. 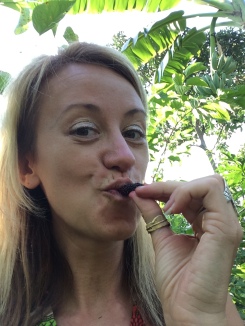 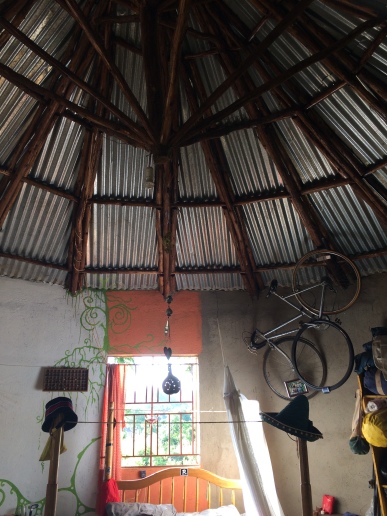 I had a glorious evening and I have now lost count how many times I have fallen (risen actually) in love with the moments that are passing by with me here.

Then as it turns out, there was more mischief to laugh at on the boda journey home too. Three Ugandans were being driven on a boda on the same road, and approached us with another twinkle in their eyes. They greeted me in English but quickly returned to their favoured Lugandan. And I learnt that the laughter and mischief was actually involving them asking my friend and my driver if they could do an exchange – if they gave them the woman in the middle of the boda, could they please take me? This made me laugh aloud once more, and the banter continued for a while as we sped along the busy road side-by-side.

This place continues to amuse, bemuse, and astound me. I dont think there have been even two days that have been the same, and as many people have commented upon, I seem to have grown younger with each day that has passed. I have suntan marks from laughing and I require so much less sleep than I have ever needed before; I think this is due to my soul feeling so invigorated to begin every new day and see what it has in store for me.

4 thoughts on “Spirit of like-minds, beauty and mischief”