One of the main things that has excited me about a new home in Africa, has been the opprtunity to see/hear the amazing music firsthand. Over the past few years I have been going to more and more African music events, and I have repeatedly felt the rhythms and sounds stir within my blood. I do not, as yet, have the freedom and fluidity of many African dancing styles, but I am a dancer all the same. One of my singing teachers used to frequently refer to an African phrase – “If you can walk, you dance.  If you can talk, you can sing.” And this resonates with me deeply.

Since arriving to Uganda however, I had thus far failed to locate any live music or hear of any dance events. I yearned to stumble across villagers playing their drums, dancing and laughing together. And what I firmly did not want, was to attend an ex-pats traditional dance show. I came here to learn what life here is like, what stirs the peoples’ hearts, what traditions they have, what music makes their hearts sing, what rhythms make them unable to remain still.

Consequently, imagine my excitment when I hear the whisper “Nyege Nyege” fall into my ears. Facebook has been a good friend to me as I have begun to build my awarenss of events and people here. And so has Google. I saw signs for this festival but it said very little. Thus I was very thankful that where I am currently based, unlike other parts that I traveled to here, I had access to both electricty and internet. I found details of the festival, from various sources (e.g. ‘Resident Advisor’) and my excitement grew.

I had no idea what to expect from a Ugandan music festival, if it would be all locals, if it would be commercialised and manufactured for us Mzugnu, or what. All I knew was that it was a 3-day opportunity to not only hear music from this country, but it would offer me a plethora of music, rhythms and art from the whole continent. And that festival title – what an amazing phrase. One that I will refer to again and again. It fits me so very well. Music is in me. Wherever I am, whatever I do. I feel it is a connection beyond words, but it is only a concept enjoyed within our own selves. It needs no other.

Somewhat frustratingly I discovered, only a few days before the festival, that I was required to work on the Saturday. My heart fell and I was crestfallen, believing that this meant Nyege Nyege was now out of reach for me. However, the more I recognised how important it had become to me, to access the music and enter into another space of Ugandan experience, I changed my perception and manifested a way to get there. Albeit for half of the time than originally planned.

What an utter joy it was for me that I acheived this! I have wandered a fair bit here already and I have wondered a lot. I have laughed, cried, felt despair, been utterly confused, felt extreme exhiliration, and had my heart stirred in unmentionable ways. When I walked into Nyege Nyege however, I breathed. I came home. I knew in that moment that I was most certainly in a place that is for me. At least right now. 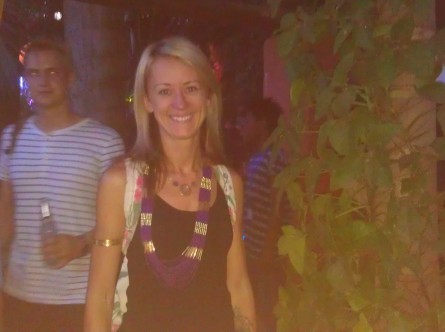 I smiled from the moment I arrived to the moment I left (even when I had somewhat of a fuzzy head after sampling the ‘Warangi’ during the festival). There were many overlaps with other festivals I have been to, including the half-moon jungle party in Thailand last year, and there was an ease amongst all of the people there. Such that it soon became so, that I was friends with more people than I could count. I love this about festivals, wherever in the world I have been, that we are all there same for the same reason and thus we are combined in our intentions for joy.

Being outside for the whole time, even when we had a heavy shower (for all of ten minutes that is), was utter splendor for me. I could feel the earth beneath my feet, the air on my skin and the music in my soul. If only I could raise the thermostat for all of the UK festivals too – there are such beautiful landscapes for these but the mud and the cold can often really interfere with the freedom of spirit there.

There was colour everywhere, decoration, happiness, laughter singing its way through the air, and creativity in abundance. 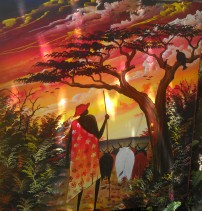 I struggled to keep track of which artists I was listening to, and where they were from. Mostly because I was enjoying myself so much that I didn’t take the time away from the present moment to collect such detail. I did take a program with me but there were powercuts and various other disruptions, as is often the way here, and this meant that the actual performances and the scripted line-ups did not match really at all. However, I have spent some time post-festival doing research, and at the base of this post are a selection of some of the amazing artists I saw, courtesy of the great music app ‘SoundCloud‘.

I went to Nyege Nyege feeling harangued from a long week at work and very little time in the outdoors. I felt a bit shutdown and my colours were dimmed. I went with one friend and arranged to meet a second there. By the time I left however, I had a much fuller list of friends, my colours were shining through and my spirits were raised. 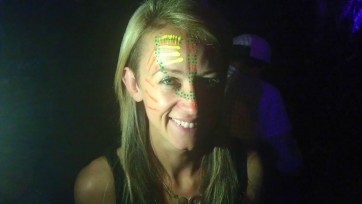 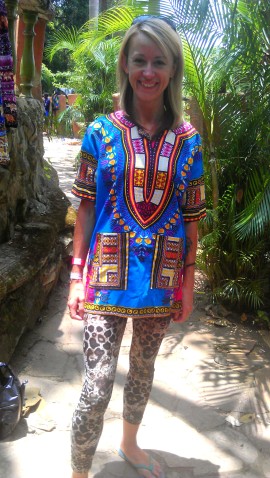 As the second afternoon was drawing to a close, I went wandering to locate a bathroom. As I approached, I heard screams and shouts and saw people running, en masse, away from what appeared to be people wielding guns. No-one seemed to be concerned by this, or perhaps they hadnt realised. (It was at the back of the festival, in one of the camp fields). Me, being the inquisitive look first, think later kind of wanderer, went straight over to investigate (I probably should think a bit more before I act in such situations in future, just in case. But to be fair, I’ve always come good up until now …)

And there I was, discovering that what appeared to be some sort of militia attack, was in fact a film set. And rather than simply returning to the festival to enjoy some more Reggae beats in the sun, I found myself being asked “Would you like to die today?” “Sure, why not, sounds like fun.” Are these the words of a sane woman I ask you? Who knows. They were the words of mine, in that moment. And what fun it turned out to be!

Before I even had time to really grasp what the story was, etc, I was being kitted up with my death scene attire/props, being asked if I minded if they cut my top open, and being introduced to the Wakaliwood children film stars of Uganda.

I was given instructions in seconds and in the blink of an eye, I was there in the midst of a death scene as the militia burst through into the village and attacked. It was an absolute hoot, and although it happened too fast to capture the actual scene, there were some candid shots made of my moment-of-fame prepwork! (I will send the link to my actual film scene when it is released at a cinema near you … hehe … somewhat of an odd moment filling in the cast book with details such as “Date I died“.)

I will be using the phrase Nyege Nyege time and time again, and I feel so thankful for yet more amazing times here in Uganda. May you find some music that pleases your ear, and may you also know this irrestible urge to move to the rhythms that greet you in your life.

3 thoughts on “Nyege nyege – the feeling of a sudden uncontrollable urge to move, shake or dance”